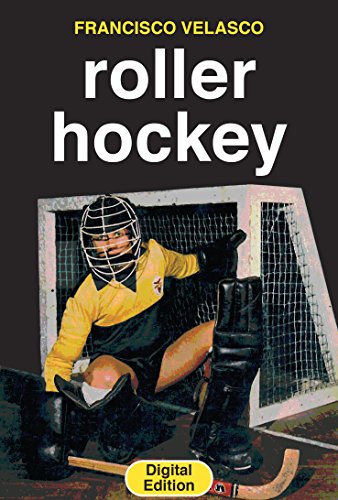 THE BOOK: A condensed history of roller hockey with special relevance to the two most significant phases of its evolution: the hockey of improvisation and the tactical hockey. Francisco Velasco describes in detail the most important themes for the practice of roller hockey, such as roller hockey club organisation, the key staff, athletic and technical preparation, individual and group preparation, analysis of the movements of players on the hockey rink, the tactics relating to various situations of attack and defence, and so forth, clarifying the descriptions with photos, diagrams and over 70 schematic figures. The author describes a complete course of action ranging from organizational issues right through to worked-out tactical schemes and solutions for situations in the field of play. The present work is, in the word of its author, an attempt to start a wider discussion on matters that are at the root of the fissures one detects in this sport.

THE AUTHOR: Francisco Velasco first learnt how to roller skate at the age of eight years, played his first official junior roller hockey game when he was twelve, and was chosen for the Mozambique National Roller Hockey Selection at 19. The author visited Portugal for the first time in 1955, as a player of the roller hockey club, SNECI of Lourenço Marques. From 1956 to 1960 and in 1964, he has represented the Portuguese National Team, and was twice crowned with the title of World Champion, as well as conquering the European and Latin championship titles. In 1956, at the age of 22, he began his career as a roller hockey coach at the Grupo Desportivo Lusalite, Dondo, Beira and at Clube Ferroviário de Mozambique, and remained head coach at the latter until 1961. He was also responsible for coaching the Sporting Club of Lourenço Marques and the team of the Fiestaland and Portuguese Association of South Africa. From 1978 to 1980 Francisco Velasco was a member of the Mozambique National Commission for Roller Skating and in 1982 was invited to coach the Angolan National Team for participation in the Cup of Nations in Montreux, and in the World Cup held at Barcelos in Portugal. During the 1982–83 season he coached a professional hockey team in Italy, and was invited to lecture at a course for coaches organised by the Italian Roller Hockey Federation at the Scuolla dello Sport of the Comitato Olimpico Nazionale Italiano at the Acqua Acetosa centre, Rome.